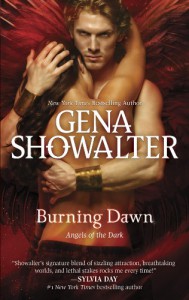 This Saturday I actually did nothing special except for reading this book. It's been a while since I allowed myself to shut myself off the world and just relax this way. I swear I can do that probably most of the days of the week hehe

I really enjoyed reading this one. This series is good!! Different than the Lords of the Underworld and yet we get to meet some of the warriors and their women. The setting and the feel of the world itself is in a way the same yet the fact that a lot happens in the heavens and depends on higher beings makes the feel of the series different somehow.

I should also mention that even though I thought this series will be suitable to younger crowds (from the 2 previous novels) I hope those youngsters grew up a bit from the last two since this one has mature content ;)

We got to meet Thane in the first book in the series. He's Zacharel's second in command. Thane doesn't get close to the people around him, he is loyal to Zacharel, mainly because he respects him but he is close only to his two best friends - Xerxes and Bjorn. Each of them went through horrors when the three of them were captured by demons. Back then they were strangers but emerging together from captivity they became a family, brothers.

The previous book ended with Thane enthralled (against his will) to a Phoenix and Bjorn disappearing into thin air in the middle of a battle against demons. We start this book with Thane in the Phoenix camp enslaved AGAIN, this time, by Kendra who uses him as a sex slave.. He is poisoned by her in a way he isn't aware of his identity, he sees himself as her slave and is very attached (=addicted) to her.

Elin is also a captive in the camp. She is half Phoenix but has no Phoenix powers. She is basically a slave. She lost her entire family to the Phoenix's clan and she wants to run away but she is too frightened to even try, then she sees Thane and comes to the realization that together they can rescue themselves. All she has to do is make his head clear again so he'll remember who he is..

Thane and Elin escape the camp into the heavens where he keeps her in his club working as a waitress. He wants her close by so he can guard her from the rage of the Phoenix clan but he has another reason, he just can't get away from her. Something about her just draws him and he doesn't understand the appeal he finds in her. She is nothing like the lovers he is used to, meaning the ones he enjoys inflicting pain upon then letting them torment him back the same way - but only for one night, then it's over and he moves on. Never to sleep with them again. He doesn't know how to make love to a woman, how to be gentle and sweet, gentle Elin isn't hard core to be interested in what he's into and he's not sure one time will be enough or that he will be willing to give her up never to see her again after sleeping with her.

Elin is a contradiction in a way, maybe it's the fact that she is half Phoenix half Human. Her Phoenix side makes her feisty! She speaks her mind, she is brave in her way and yet on the sight of blood or aggression she crumbles to the ground, that probably thanks to her Human side and the traumas of her life. She quickly befriends the other waitresses of the club even though they are very different from her, maybe more like she wish she could be. Strong, brave. She also have a "secret crush" on Thane but as the other waitresses tells her - everyone has.. but they also tell her why she should give it up...

Though they are both drawn to one another they keep being apart. Elin doesn't want him to know she is half Phoenix so she is afraid to get too close so he'll find out and kill her or send her back to their offenders - the Phoenix clan. After what he went through with Kendra he won't be able to forgive her Phoenix mother even if she has no Phoenix traits, especially not ones that can enslave him as Kendra did..  Thane tries to keep himself apart as well, mostly because he is confused with how he feels towards her, how different she is to him then every other woman is.

Their romance progressed quite slowly and I enjoyed their barter. I liked less how they kept leaving each other without saying a word instead of trying to explain themselves but I guess for the both of them trust isn't an easy thing.

Besides their love story we continue with the search for the demons who killed Germanus (and a bit of Bjorn and his disappearance). Most of the plot is of the main characters which IS a good thing but in a way it means that all the action was brushed and rushed to the end of the book. I didn't mind that much since I loved the both of them, loved the interaction between the three best friends and all the characters around them (oh Axel.. can't wait to get HIS book!). We didn't meet more warriors which was fine by me. Too many only confuses me :D

I think one of the things that made Thane and Elin's love story so enjoyable is that both of them are so "human". I mean the both of them have their secrets, both of them went through hell and back and not used to putting all the cards on the table or even believe they deserve being with someone they love so much. They keep apart from one another because they are used to being this way even though in their hearts they DO want to be together. The both of them find it hard to believe in the other, accept the good intentions for what they are. Thane is really a sweetheart when you get to know him, I totally and absolutely fell for him (yeah, with every other female.. I know, I know.. :P) and Elin was also really sweet in her way but I loved that she has a spirit inside of her that she needs to know how to "use" or "be". She uses her mouth mostly to show her feisty-ness because she doesn't know any other way and she isn't brave enough to do more, but that changes. I loved her in the end showing her worth, showing how strong she became.

Can't wait for the next one!!! I have a feeling it would be of Bjorn, kinda makes sense with all we learnt about his disappearances and the why of them. Too bad I have to wait a WHOLE year :( I WILL get another "shot" of Gena in November with Torin's book (The Darkest Touch - Lord of the Underworld #11) but that also seems far far away....