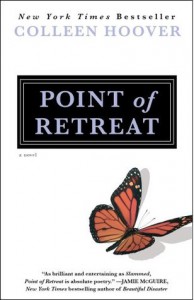 For me, especially after the previous book, this was a total disappointment. Remember I wrote I get angry whenever High School is mentioned? well, it's not ABOUT High School it's about been in that stupid age and acting like a freaking teenager. I'll give part on one of the book (first 60%) less than 3 stars, luckily the second part (last 40%) made up for it. I'll read the next one because I'm anal this way :P But actually I would recommend the first book to right about anyone but this one? only to Young Adults (=teenagers) or people who are really into reading YA books.

On to the plot- This whole book it written from Will's point of view which is nice but it took me a little getting used to since I've just finished Layken's side of the story.

First part of the book deals with Will's ex - Vaughn (I'm not even sure how to pronounce that name but considering how irrelevant I find her I guess it doesn't matter). Also Will's best friend Reece shows out of the blue (another irrelevant character).

Basically this whole part involves Will's (rather unsuccessful) attempt on showing Layken that their relationship is right and they should be together, yeah it happened because Vaughn showed up but don't expect Will to actually be doing something he shouldn't just expect Layken to be a 14th year old getting jealous of her boyfriend meeting up with his ex and being all insecure at why he loves her and if the reasons they are together are "justified". I tell you now, for me this is the most unattractive treats anyone could ever have, I think I would have given up a relationship if a guy EVER pulls a childish stunt like that on me.

So all I have to say about that is - GROW UP.

Now that the boring annoying, childish part of the story ends we continue to the second part of the book where "something bad happens" which makes all the "gang" come together. In gang I mean - Will and Layken, Eddie and Gavin, the boys Kel and Caulder and also the "new neighbors" (which I actually really liked!). This part was beautiful including the Slams by Caulder and Kiersten (the 11 years old new neighbor) which was really beautiful and touching. I think Caulder hadn't have this kind of moment before where he spills his heart out. If this book would have been a short novella of this part of the book I would have given it 5 stars. But the first part destroyed it for me.

I have one this to add... There is something about their relationship I find really old fashioned and a little unbelievable. I'm going to "spoiler" a little here, nothing that will reveal anything really important, and you will read it in the first chapters anyway..

They kiss practically half of the book and in the first book they kiss quite a lot yet they have been a year together without really making out? really? not to mention not sleeping together after a year together. really? really? After ALL they have been through I expected their relationship to progress in that path as well. Also there is a slight side plot about Eddie and Gavin which made me wonder about them being well, children. They act no more then 16 years old at the tops. Yeah they have their moments when they are more mature because of what happened to them in life but it doesn't change the fact that they ARE behaving even less their age, especially when we talk about sex. This book was written about two years ago? maybe less, I"m not saying people should be irresponsible about having sex, but I think that it would have been more believable if they would have matured also in this aspect not only in the aspect of dealing with live and death. It might be due to that fact Colleen didn't want to write a full sex scene which I would understand, but she could have acknowledge that it happened without giving full details.. This way is, well, as I already said unbelievable considering the time we live in and what they have been through together.

As I wrote in the beginning, I'll be reading the next one next, hopefully they would actually grow up to becoming New Adults..